Winter is Coming: Time to Protect your Property

An often quoted line in the hit TV show Game of Thrones, said to warn of the onset of winter and impending doom. Where property is concerned it holds true in real life too.

As autumn and winter approaches and the darkness comes earlier, certain types of crime rise – not least those involving burglary, arson and vandalism.

A report by the Office of National Statistics (ONS) in 2013 sought to determine which types of crime were seasonal and their findings, while perhaps unsurprising, underline the need for additional security during the autumn / winter months.

Robbery from businesses is much more common in the winter months, as displayed in the graph below, taken from the ONS report: 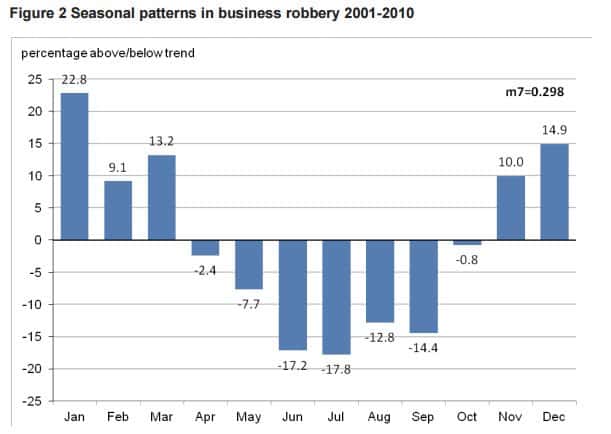 Similarly, domestic burglary increased during autumn and winter, with the report finding that offences were 1.14 times higher in winter – an additional 6,748 offences in fact!

You can contrast that against other types of crime. For example, the ONS report highlights the fact that shoplifting is more common in spring, while thefts of bicycles occurs far more often in summer.

It would be fair to say that this is relatively obvious, but we believe that having statistical proof makes the decision on whether or not to invest in security precautions that much easier.

It makes sense, to us at least, that businesses and homeowners should look to increase the security of their properties BEFORE the days get shorter in order to prevent potential burglaries and robberies occurring.

An investment now for businesses in roller shutters, Hammerglass, Crime Shield, Vandal Shield and/or window bars could save thousands of pounds down the line by preventing vandalism, broken windows and ultimately robbery of expensive stock or equipment from warehouses, offices, shops and more.

Homeowners worried about the vulnerability of their homes to burglary (but also concerned about how their home actually looks, quite understandably) should look at window security options like retractable window grilles or removable window bars.

As the Starks in Game of Thrones tell us often – winter is coming. Better to be safe now than regret it later.

For a free online quotation use our window security calculator or for expert advice on the best option for your property give us a call on 0161 413 0766.